Often called orcas, killer whales are one of the most recognizable water mammals on the planet and can be found in all oceans. They are part of the cetacean family, like all whales, dolphins, and porpoises. Cetacean is an ancient Greek and Latin word that means “huge fish” or “sea monster.”

There are 90 species of cetaceans. All are highly intelligent, have complex social behaviors (like humans), and are very large. They range from 4 1/2 feet long (vaquita) to more than 31 feet (blue whale).

There are three main types of killer whales found in the north Pacific Ocean: offshore, transient, and resident.

Offshore killer whales travel in large groups and have the largest range of the three types. They usually are found far offshore, from southern California to the Aleutian Islands in southern Alaska.

Resident killer whales range from California to Alaska and are categorized into three populations: Northern Resident, Alaskan, and Southern Resident.

Part of the Resident killer whales, Southern Residents are unique. They are the only endangered population of killer whales in the United States and are found only along the coasts of central California to southeast Alaska—nowhere else in the world.

Killer whales have existed for more than 50 million years, though they looked quite different originally.1 Scientists believe killer whales evolved from land-dwelling mammals in a process that took millions of years to become the whales we see today.

Many Indigenous communities along the Salish Sea tell stories about the creation of killer whales.2 The Tulalip Tribes, for example, tell of brothers who used to hunt for seals, salmon, and shellfish in the Salish Sea and share their catch with the community.

One day, following a disagreement, the brothers decided to leave their home and begin a new life in the waters where they had long hunted. Eventually these brothers became killer whales and continued providing seafood to Coast Salish people during famine. Their descendants are said to be the Southern Residents, which still hunt for Chinook salmon in the Salish Sea.

Killer whales have a complicated modern history—they used to be hunted to protect the fishing industry and dozens of them were captured to be put on display. In addition to this, pollution, lack of food, climate change, and excessive boat traffic and noise have put them at risk of extinction.

First official counts of Southern Residents weren’t until 1974 and only 71 whales were found. This count came after more than 30 whales had been captured to be put on display in marine parks.

The population slowly rebounded and by 1995 the population peaked at 98 whales.3 By 2001 though, these increases were nearly erased and only 80 whales remained. The most recent 2022 census counted only 73 whales.4

Killer whales have mostly black tops, white undersides, and a pointed dorsal fin that sticks out of the water. They can weigh up to 11 tons and be up to 32 feet long. The white markings in the whale’s saddle patch (the area behind their dorsal fins) are distinct and can be used to identify them, much like a fingerprint.

One of the easiest way to identify different killer whale types is by the shape of their dorsal fins and saddle patches. 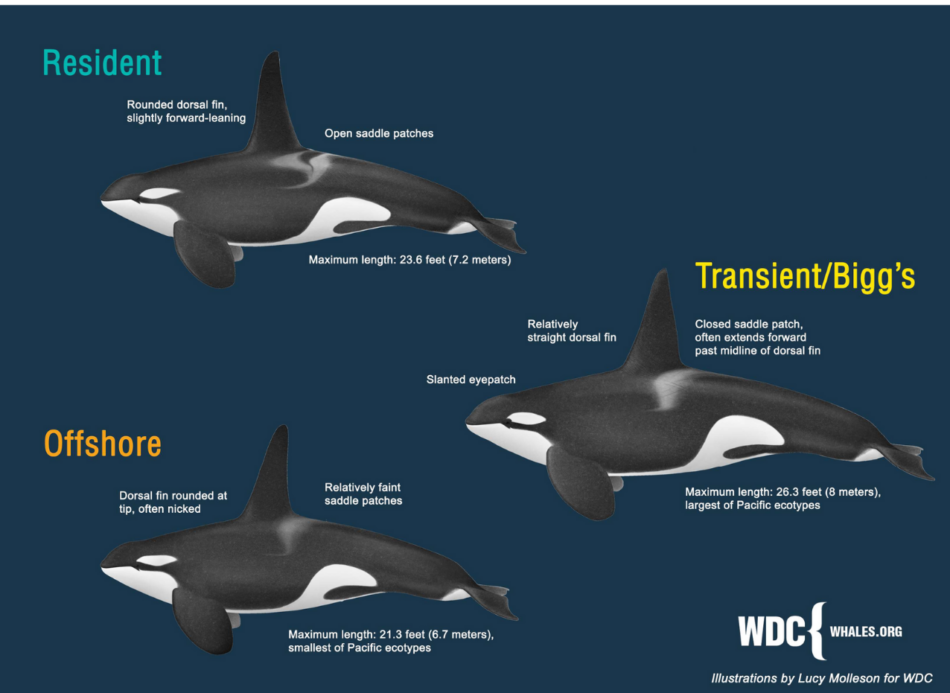 Killer whales are found in every ocean. Southern Residents, however, are found only along the Pacific Coast. During the fall and summer, they spend most of their time around the Salish Sea and southwest British Columbia. In spring and winter, they travel from the north Pacific Ocean down to northern California in search of food. 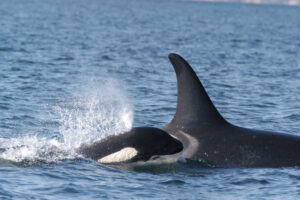 Photograph from the National Oceanic and Atmospheric Administration

Killer whales are highly social and live in small family groups called pods. Each member of the pod is linked through the mother. There are three pods of Southern Resident killer whales: J Pod, K Pod, and L Pod.

Male orcas live for about 30 years on average, while females live about 50. Females are first able to have calves when they are 10–13 years old. Birth rates for orcas aren’t well known, but scientists believe that one orca is born every 5 years over a period of 25 years. That means a female orca can have up to five calves in her lifetime. 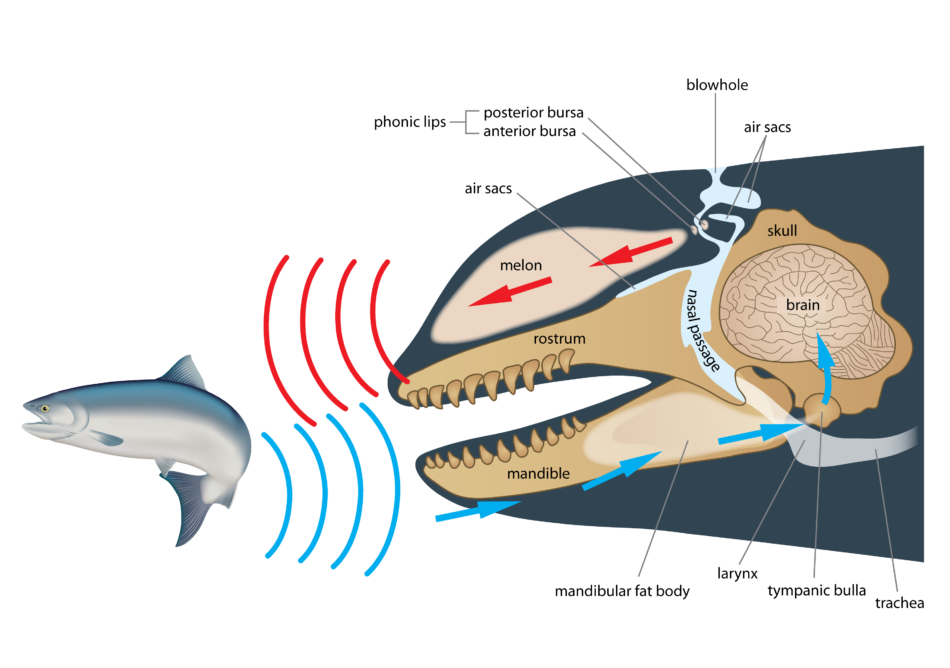 The Importance of Orcas

Orca are cherished by people around the world. They are an iconic species of the Pacific Northwest and are culturally, economically, and ecologically valuable to the state and native communities. 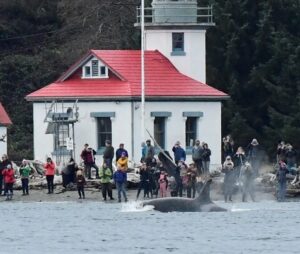 Southern Resident killer whales have inhabited the Pacific coast for longer than humans have existed. Orcas are the official marine mammal of Washington State and attract visitors from around the world to see them. This generates significant economic benefits. Whale watching contributes about $60 million a year to Washington’s economy and supports jobs in coastal communities.5

Tribes are sovereign nations with thousands of years of knowledge, expertise, and insights into salmon and orca ecology. The region’s land, water, and animals are deeply rooted in tribal life. Salmon have been integral to tribal livelihoods and are an important food. Across the state, tribes are engaged in watershed restoration and protection efforts important to both salmon and orca recovery. Orca are honored in many tribes and are a source of culture, inspiration, and celebration.

Orcas are interwoven in the culture of Coast Salish people.6 They are part of their history and honored in their stories and artwork.

Coast Salish people consider orcas to be family members. They are intelligent, sociable mammals that share some of the Indigenous values and traditions, such as staying within their same multi-generational family (pod) their entire lives. As salmon are essential to the Southern Residents’ diet, they also are central to the Coast Salish way of life.

To learn more about the many different tribes in Washington state, visit the Governor’s Office of Indian Affairs. 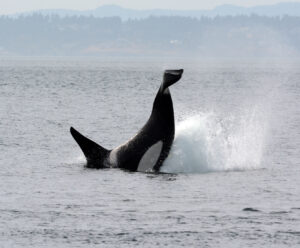 As some of the largest creatures on the planet, whales absorb huge amounts of carbon that would otherwise be captured in the atmosphere and lead to increased temperatures and air pollution.

When whales die, they sink to the bottom of the ocean, taking the carbon trapped within them. This can be as much as 33 tons of carbon. By comparison, trees only absorb 48 pounds of carbon dioxide a year.7

Whales also assist with the production of phytoplankton, tiny ocean bacteria, and algae that produce up to 50 percent of the Earth’s oxygen.8

As whales travel the oceans, they leave a trail of iron- and nitrogen-rich waste. This waste provides the perfect conditions for phytoplankton to thrive. More phytoplankton means more oxygen.

Southern Resident killer whales are one of the most at-risk marine mammals in the world. In 2005, they were classified as an endangered species because their numbers continued to drop.

Today, the challenges facing the Southern Residents have resulted in major health issues and have put them on a course for extinction. The primary threats to the orcas are:

In 2018, Governor Jay Inslee established the Southern Resident Killer Whale Task Force. The task force was given the job to find immediate and meaningful solutions to help Southern Residents.

The newly created task force set a goal of 10 additional orcas in 10 years, which would be 84 whales by 2028. The task force also determined solutions that would help reach that goal. Its findings were presented in two reports, identifying 49 recommendations with many actions.

In 2021, the Governor’s Salmon Recovery Office named its first orca recovery coordinator to work with partners to implement the task force’s recommendations. That work continues today.