One of the things that distinguishes Southern Residents from other orcas is what they eat. Unlike other orcas which eat different kinds of fish, seals, octopus, and other marine mammals, Southern Residents eat mostly Chinook salmon. Scientists estimate that 80 percent of their diet comes from this once plentiful fish.1

The declines in the number of salmon began in the late 1800s. As cities and towns grew, salmon habitat was destroyed. Logging, farming, dams, pollution, and water use damaged the places salmon live. By the end of the 1900s, salmon species were listed as threatened or endangered across three-fourths of Washington State, with Chinook being the least abundant. Not only are there fewer of them, but Chinook, which are the largest of the Pacific Salmon species, are getting smaller.2

To improve salmon populations, hatcheries were built to produce salmon so there would be enough for industries, for food, and for recreational fishing, and now for conservation and orca recovery purposes.

In 1999, the State wrote its first Statewide Strategy for Recovering Salmon: Extinction is not an Option. The strategy recommended creating a network of organizations in seven salmon recovery regions across the state. Those recovery organizations wrote plans for the salmon, steelhead, and bull trout in their areas, and today are implementing those plans. The strategy was updated in 2021: Governor’s Salmon Strategy Update.

The work to date, has slowed some of the declines but far more needs to be done. Experts estimate that only 22 percent of the projects needed is being funded today. Both funded and unfunded priority salmon projects are tracked in the Salmon Recovery Portal, which is an online database that houses salmon habitat recovery actions across the state. Priority projects are identified each biennium and submitted to the Legislature for funding. Local salmon recovery practitioners provide the list of projects that, if funded, would help protect and restore salmon habitat. Review the current list of planned projects with the Planned Project Forecast Dashboard. The chart below provides an overview of how salmon and steelhead are doing in Washington. 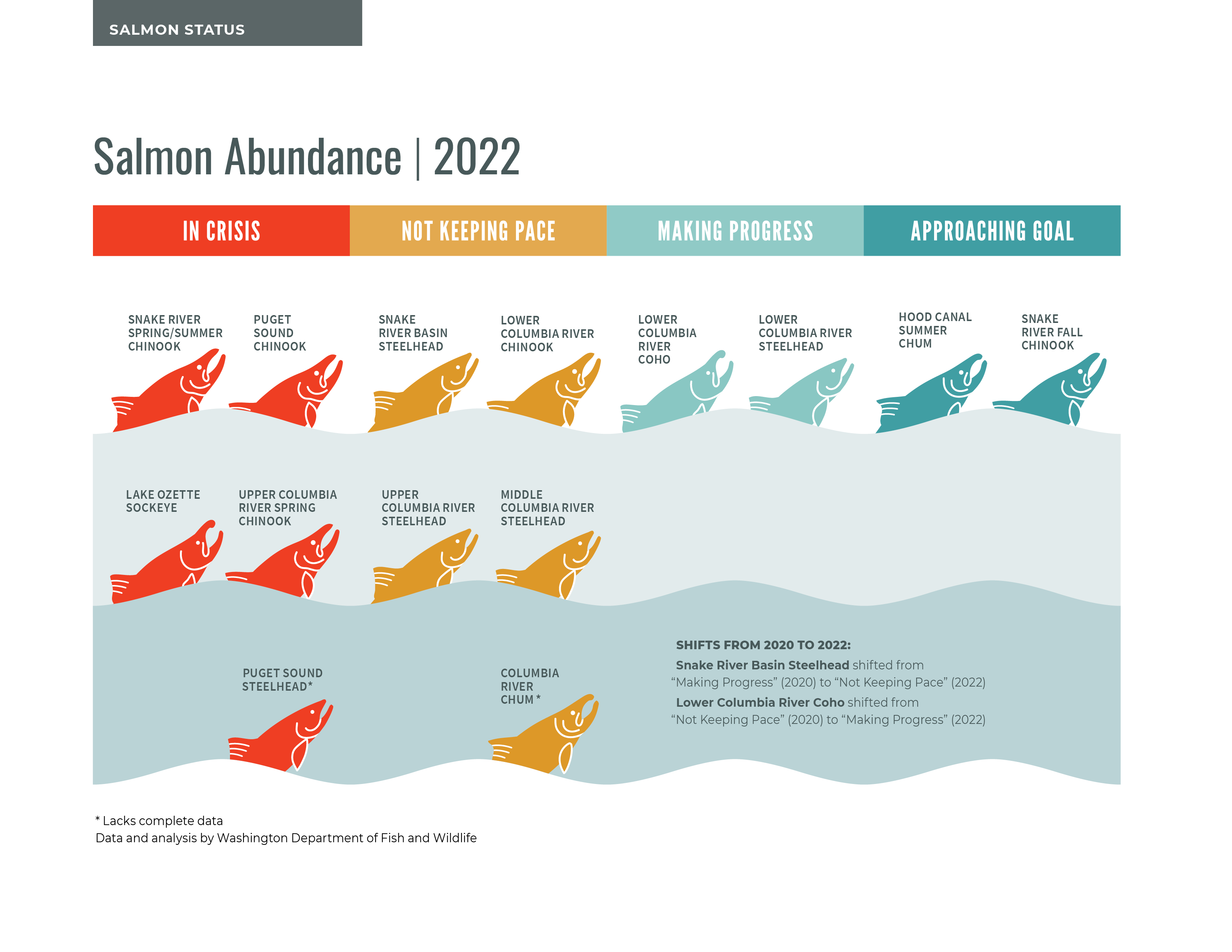 To see more details about salmon recovery efforts and how salmon are faring in your community, visit the State of Salmon in Watersheds Web site.

Photograph by the National Oceanic and Atmospheric Administration

Significantly increase investment in restoration and acquisition of habitat in areas where Chinook stocks most benefit Southern Resident orca.

Immediately fund acquisition and restoration of nearshore habitat to increase the abundance of forage fish for salmon sustenance.

Establish a stakeholder process to discuss potential breaching or removal of the lower Snake River Dams for the benefit of Southern Resident orcas.

Support full implementation and funding of the 2019–28 Pacific Salmon Treaty.

Direct the appropriate agencies to work with tribes and the National Oceanic and Atmospheric Administration to determine if pinniped (harbor seal and sea lion) predation is a limiting factor for Chinook in Puget Sound and along Washington’s outer coast and evaluate potential management actions.

Support authorization and other actions to more effectively manage pinniped predation of salmon in the Columbia River.

Reduce populations of nonnative predatory fish species that prey upon or compete with Chinook.

Monitor forage fish populations to inform decisions on harvest and management actions that provide for sufficient feedstocks to support increased abundance of Chinook.

Governor updates the statewide salmon strategy and requires a work plan every 2 years to direct implementation.